Process variability is the bane of quality engineers, plant managers and CFOs, to name just a few of the people heavily vested in plant efficiency. Manufacturing people chase quality and consistency from sun-up to sun-down.

One Michigan company has been heavily focused on helping manufacturers identify and remove one of the costliest, and most misunderstood process variables.

Saint Clair Systems in Washington, MI has been manufacturing equipment that solves viscosity control problems, for over 30 years.

Fluid viscosity variation is a major source of quality control frustrations in paint, coating, sealer/adhesive dispensing, printing, and other processes that utilize fluids. Millions upon millions of dollars are spent, each year to mitigate quality control issues directly caused by varying fluid viscosity. For example, when a paint process is developed, equipment performance and set-up is contingent on a given coating formula. Fluid viscosity is a MAJOR component of that formula. Sophisticated spray equipment, and hours of process adjustment are rendered inaccurate and ineffective when the fluid viscosity changes. It is an uncontrolled variable in an otherwise highly controlled process. To compound the situation, process operators often misidentify, or misunderstand the cause of newfound quality defects, that viscosity variation will inevitably bring.

Saint Clair Systems (SCS), COO, Mark Portelli, recently wrote a blog. The main theme of the blog was that eliminating the problems associated with process material temperature and viscosity variation is easy.

“We have been in the viscosity control business for over thirty years. Installing, implementing, and optimizing these systems is very straightforward. Making the decision on whether you should install one of these systems is the challenging part,” Mark said.

“What kinds of things do we look for? There are primarily three simple indicators that highlight potential for a good fit.”

The cost of automating your dispense process, (paint, sealer, adhesive, etc.), continues to decline each year. As the costs have been decreasing, the quality of the automation equipment and programming have been increasing. So, automation is becoming more affordable, but what about the benefits?

Among the benefits, the three most listed include Improved Flexibility. As the skill and abundance of robot programmers grows, robots can easily be reprogrammed to perform new tasks. Another benefit frequently identified is Labor Savings. Robots are there every day, doing highly repetitive tasks without injury, are equipped for hazardous environments, and do not need breaks. The third big benefit is Improved Quality. Human beings cannot match the consistency and repeatability of an automated process.

Here is the problem. The automation is going to perform the same exact motion over and over again – perfectly. If anything in the dispense process changes, causing an undesirable outcome, the automation is going to reproduce that undesirable outcome over and over again – perfectly. The dispensing variable most subject to change throughout the day is temperature and temperature directly affects viscosity. Without manually adjusting for changes in viscosity, you will get unwanted variation in your dispense process.

In general, automation controls one critical variable – motion. Most automated processes do a great job of controlling the rest of the variables. However, the impact of material temperature is largely overlooked or misunderstood.

We see this most often with high performing companies. They are maintaining a high level of process measurement and control and are consistently striving to meet the highest standards in their industry. When things go wrong, the impact is significant.  So, what is generating these highly impactful quality issues? In many cases, SCS is able to trace it back to a misunderstanding of material viscosity and its effect on the dispensing process. At SCS, they look at it a little differently.

Misunderstanding #2 – Controlling Plant Temperature is Good Enough:  Controlling plant temperature is good but it is rarely good enough. Depending on your system, the material can spend a significant amount of time between the source and the point of dispense. If the plant temperature is consistently maintained, (floor to ceiling, wall to wall and season to season), at your optimal dispense temperature, you might, in theory, see little variation, but consider that most materials, (sealant, adhesive, paint and ink), can double in viscosity with a 15° F decrease in temperature. This also means that the viscosity can be cut in half with a 15° F increase in temperature. Many materials can see a significant shift in viscosity with 1 or 2 degrees of change.  Even a temperature controlled plant can easily vary from 65° F to 80° F in a normal day. That corresponding fluctuation in viscosity can create significant quality issues. 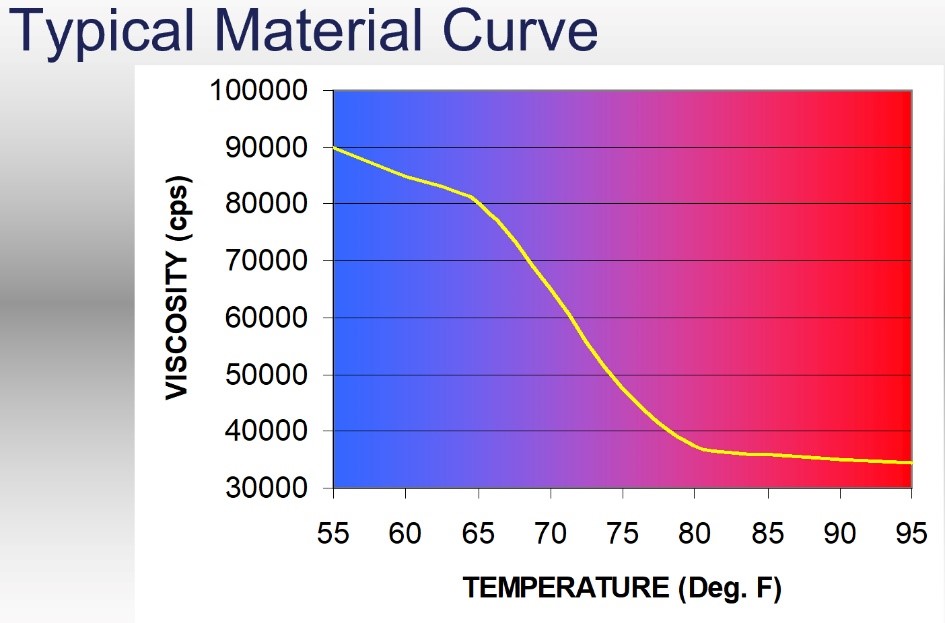 The diagram below is a graphic representation of testing that SCS did while dispensing a bead of hem flange sealer. While robotic systems can repeat the gun path, speed, angle and distance to the part, flow rate, and total volume of sealer on every dispense cycle, they can’t compensate for the viscosity variations resulting from the ambient temperature swings that occur from morning-to-evening and season-to-season. Shown here, temperature-based viscosity variations directly affect the shape of the bead being dispensed. 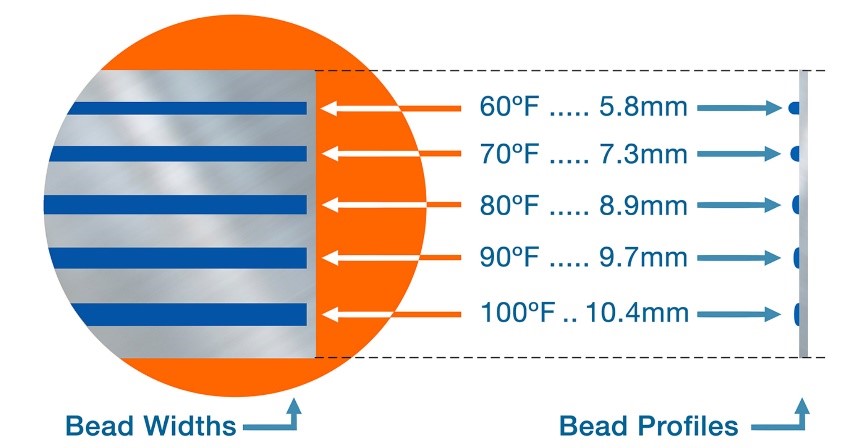 You can see the change in width of each bead on the left, and the bead height on the right. Because each bead is comprised of the same volume of sealer, the change in width is offset by a change in height – the wider beads are also flatter. This is often referred to as “spread” or “slump” and can significantly compromise the function of the bead. 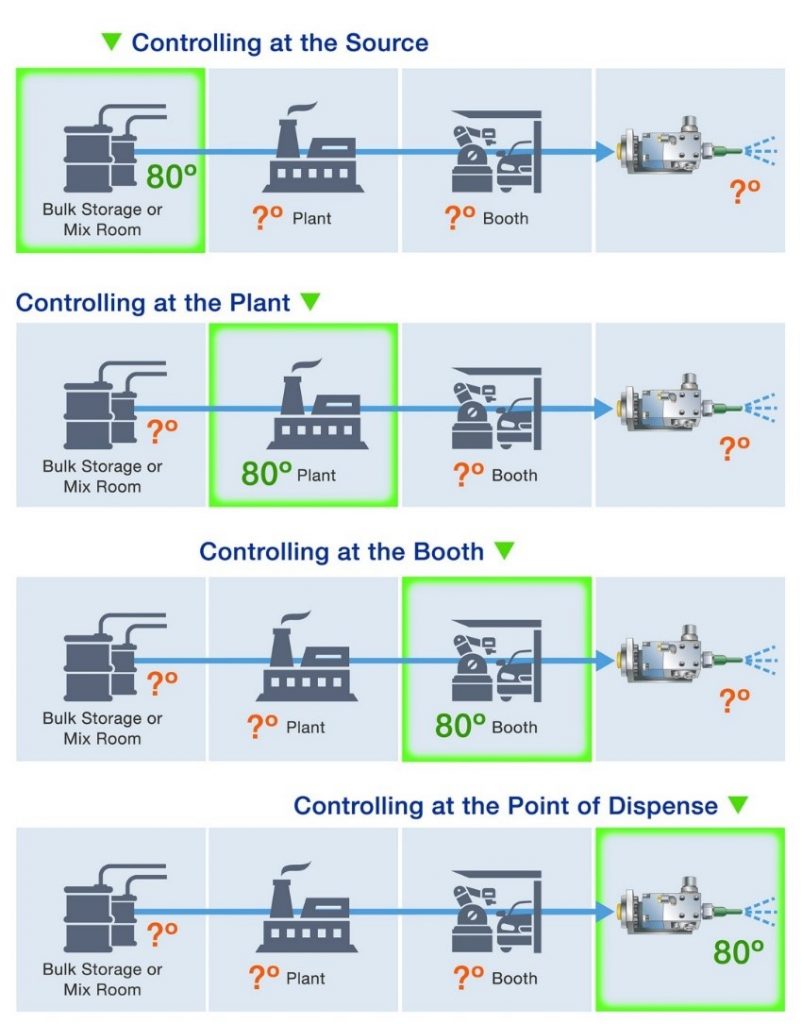 Having to deal with temperature fluctuations leading up to the booth, you may have to adjust your process either seasonally or from day to night. Adjustments of this nature leave you subject to operator judgment, that will vary from operator to operator.

Additionally, you may have to suffer the inefficiency associated with managing summer and winter blends for your material. Again, you need to be careful not to assume that booth temperature is a good substitute for material temperature. It is not.

Even if your process involves atomization, (for example a rotary bell paint application), booth temperature will not guarantee material temperature. “We have done the calculations and taken thermal images that confirm that the coating will maintain most of its temperature even after it has been atomized.”

Misunderstanding #4 – Point of dispense Material Temperature Control is Difficult, Expensive, or Both:  Not true. They have had over 7,000 systems installed over the past thirty years. It is not difficult. Also, most companies that employ this technology recognize a return on investment in eight months or less and often much less.

Many companies SCS speaks with are seeing increased demands by their customers. Whether it is better color match for tier automotive suppliers, improved finish properties for painters, or tighter standards on sealant bead applications, customer demands, and quality requirements are on the rise.

What they have observed is that the rising standards are not happening arbitrarily. They are happening because somebody else, (i.e., a competitor), is already achieving these standards or that the customers themselves are capable of holding these new standards. They are demanding better because they know it can be done. In fact, most of the companies they work with are initially capable of meeting the new standards too, but not consistently. Quality variation, scrap and rework are major impacts to their bottom lines.

Controlling all of your dispense variables is the key to consistency. This often means new dispense equipment, better automation, more training, or any number of things. Mark Portelli says, “Obviously, we view everything through the prism of temperature and viscosity. While it may not be the most important variable you have to control, it should probably make the list of things to review if you are unable to consistently meet new standards of quality and appearance.”

While there are more, those are the three primary indicators of a good fit between a dispensing process and material temperature and viscosity control. If you have any of these:

you may want to look into it further.

SCS has a variety of tools you can use to self-evaluate and you can find them on their website, www.viscosity.com.

Toyota will cut domestic production by around 4,000 vehicles in July, it said on Wednesday, after heavy rain disrupted parts supplies, raising the possibility it could fall short of its global target for the month. Read more….

The automotive semiconductor market will equal $250 billion by 2040, based on rapid development of electric and luxury vehicles. That’s the conclusion of a report from consultant KPMG titled “Automotive Semiconductors — Accelerating Into the New ICE Age.” Read more…

Hertz Global Holdings Inc.’s $4.2 billion deal with Tesla Inc. equates to an order for 100,000 cars.  That’s a commitment to the future of EVs that has thus far been unrivaled.

That’s a huge order for Tesla, a win for Hertz and an easy entry to EVs for curious consumers. Read more….

GM is all in on EVs

DETROIT — General Motors said it will work with its dealerships in the U.S. and Canada to establish a network of 40,000 electric vehicle chargers over the next four years. Read More…

In the wake of government announcements by Prime Minister Yoshihide Suga, that Japan will aim to cut emissions by 46% by 2030, Honda officials announced that their goal will to be an entirely EV automaker by 2040. Read more...

While most automakers are going “all-in” on Electric Vehicles, Toyota is also keeping an ace up their sleeve in the form of Hydrogen powered platforms. Read more…